Thorikos, an ancient city in Attica, was the site of a 5-kilometer (3-mile) network of silver mines just below the city’s acropolis. Researchers believe that the slaves did the hard work of carving the bedrock and extracting the precious ore of lead and silver, which later contributed to the wealth of ancient Athens.

Evidence of pottery and stone hammers made from volcanic-sedimentary rock shows that the site was first mined around 3200 BC.

Before the discovery of the silver mines at Thorikos, researchers believed that the town benefited from the mines in the Laurion region but did not have its own mines.

The excavation and analysis of the mines, which are part of a more in-depth archaeological research at Thorikos, is led by Denis Morin. Professor Roald Docter of the University of Ghent is leading the larger project under the auspices of the University of Utrect, the Belgian School of Athens and the Ephoria of Eastern Attica.

â€œToday, it is difficult to imagine the extreme conditions in which the miners had to work in this maze of galleries. Stifling heat reigns in this mineral environment. The progress of the underground sounding requires constant vigilance in this suffocating space where the oxygen level must be constantly monitored. Traces of tools on the walls, graffiti, oil lamps and grinding areas testify to the ubiquitous activity of these basement workers. The hardness of the bedrock and the mineralization testify to the extreme working conditions of these workers, mostly slaves, condemned to darkness and to the extraction of lead-silver ore. [â€¦] Mapping these cramped, complex and braided underground networks, the ramifications of which sometimes lie on several levels, represents a real challenge from a scientific point of view. ‘

The mines lie at the foot of the Acropolis of Thorikos, which overlooks the port of Lavrio, and consist of a network of chambers, shafts and galleries. Many underground system ceilings do not exceed 30 centimeters (12 inches).

French mining archaeologists have to crawl through cramped tunnels to dig the site. Some ceilings do not exceed 30 centimeters (12 inches). ( Ghent University )

Modern archaeologists do the difficult and precarious work of exploring mine shafts using alpine caving techniques. They discovered that some of the galleries had not been visited for 5,000 years. Others are now walled up and reinforced by subsequent mining activities.

They constitute the largest underground mining network ever discovered in this region of the Aegean Sea. The area was the site of numerous silver mines dating back to ancient Greece.

“Already exploited since the 4th / 3rd millennium BC, these silver mines were in the 5th and 4th centuries BC.

After the Peloponnesian War of 434-401 BC. The region was largely empty of people, according to the Thorikos Fieldwork Project website. In the years 300 BC, the region of Laurion went from a commercial and residential activity to the production of silver. â€œAt that time, Athens had a firm grip on the metallurgical exploitation of the Laurion as the corpus of 294 mining leases on the Athenian Agora shows (dated 367 / 66-307 / 6 BC),â€ the project site states.

Thorikos is one of the oldest cities in Attica, one of the 12 settlements that the ancient Greek hero Theseus unified, according to legend. The site was continuously inhabited from around 4,500 BC to the 1st century BC, according to the Greek Travel Pages site. 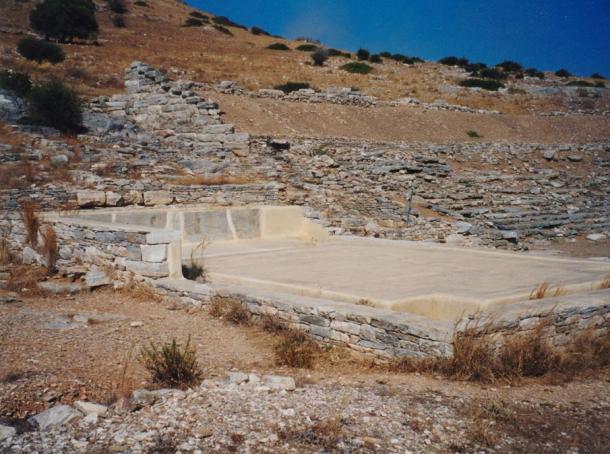 Remains of the silver processing facilities at Thorikos remain. In this facility, workers separated the lead from the silver. (Sel d’Alun / CC BY SA 2.0)

Over the years, archaeologists have excavated parts of the prehistoric settlement as well as houses, cemeteries, a theater, and an industrial section from the historic era. The mines eventually ran out and Roman General Sylla destroyed Thorikos in 86 BC. Then people re-inhabited it in Roman times until the 6th century AD when the Slavs invaded Attcia, and it was abandoned again.

Featured Image: Slaves excavated and operated the mines just beneath the Acropolis of Thorikos. The mines have just been discovered by archaeologists and rewrite the history of the silver region of Laurion. Source: Ghent University